So it’s rare that you actually start out a trip with a full on transit day, but here it is.

Interesting fact: To go to Honduras, you airplane must have a child in each row.  I don’t know if this is true or not, but we had an unnaturally high number of kids on our flight.  None really badly behaved, just a lot of them.

Met Daina with no muss or fuss in Miami, flights were all on time, luggage got to us with no issue, looks like everything was starting off the exact reverse way the last trip was.  That was until we got to the Hedman Alas bus kiosk in the airport.  Turns out the 3pm bus we were planning on grabbing out of San Pedro was sold out.  However, we immediately saw the difference between Central and South America.  Where as in some parts of South America we would have been greeted by a “Meh” and a shoulder shrug, the guy behind the counter here actually asked his friend if other companies ran buses at the time.  So long, Hedman Alas (in spite of the awesome customer service) and hello Casasola.

Okay, Casasola – not exactly a luxury line.  But everybody on it worked very hard, no issues with security, driver drove like crazy but, in other news, it’s a country other than Canada, so that seems to be par for the course.  We got to Copan Ruinas about when we expected, jumped into a tuk-tuk which literally had zig zag up a hill to get us to where we were going, which is the charming Casa del Cafe.

We get greeted by a girl named Fatima who immediately offers us purified water, home made ice tea, walks us to our room which is right next to a gorgeous garden where they serve breakfast every morning.  Freaking heavenly!

We get a map to walk into Copan Ruinas which, in Copan Ruinas, isn’t even necessary.  This place makes Copacabana look like Los Angeles.  It took some wandering but, once we figured out where we needed to go, we found all the big restaurants, stores and services in town.  All within a couple of blocks.  Turns out the Mayan ruins are only about ten minutes away from the downtown, too.  How awesome is that? 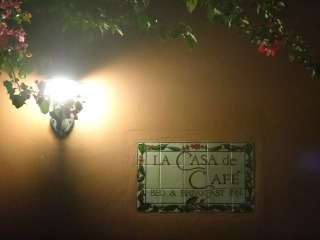 Going to be a quicky update tonight as nothing of note has happened.  Tomorrow we’re playing by ear.  I’m working off of 45 minutes of Toronto sleep and (I’m guessing) three hours of airplane sleep (non-consecutive) and Daina’s drained from his stint at his sister’s wedding, so there will be some (relative) sleeping in.

You’ll know what we’re doing tomorrow when we do, I guess!