So no hostel last night, as we chose to have our sleep on the comfort (and I’m not using quotes – it’s actually quite nice) of a Cruz del Sur bus from Nazca to Arequipa.  The plan for today was to check out as much of the city as possible before hoping another night bus to Cuzco so we can start resting up for the Inca Trail.

Now, the unfortunately part is that we were not able to see the Colca Canyon, which we knew going in.  Too far away, too long to get there, not enough time.  Sometimes things get cut during a trip and that one was barely on the chopping block.

That being said, this is one beautiful city!

Once we got out of the bus terminal, we grabbed a cab to the Plaza del Armas (kind of like when you say “Duomo” in Italy – every city and most towns have one) and started our look around.  Arequipa is known as the “White City” due to most buildings being built out of a material known as “sillar”, kind of a white sandstone that is produced by the local, semi-active volcano.  Yeah, the other thing Arequipa is known for is “Misty”, it’s “protector” volcano. 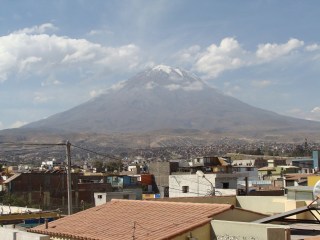 We walk around the Plaza del Armas, getting a view of the Plaza from the top of a university that we randomly found and an overpriced (but tasty) restaurant before we start a wandering.  After a brief stop at a church, our first big stop was the Andes Museum in town, where they had the remains of “Juanita”, an almost perfectly preserved Incan sacrifice, on display.  Totally thought it wouldn’t be worth it based on the video they showed us at the start, but we stuck with it and it ended up being pretty darn cool, minus one badly photoshopped picture of how Juanita was discovered.

Our next stop was the lookout at Yanahuara, where the above picture of Misty is from.  Gorgeous lookout, through we had to walk through a cloud of petrol products to get there.  Then down to the Monasterio Santa Catalina.

Basically this was a massive red-and-blue painted monastery that more resembled a fort than anything else right in the middle of town.  Filled with geraniums, orange trees, roses – every flower you could imagine, really.  It seems more nuns lived there than monks from the walk around, but who cares about the name.  Simply beautiful.

After that, we wandered down to the San Fransican Plaza, stopped at a hole in the wall for an empanada and sandwich pollo, walked a nice pedestrian shopping street and decided that we actually needed to rest.  So now we’re sitting in what I’m going to call “Safety Plaza”, as it’s a Starbucks, Burger King, KFC and Pizza Hut with a security guard watching over all four.  As Daina has put it, “Globalization Cubed” (although it would actually be quintupled).  Interesting to note, the Russian National Ballet is performing up the street with the top seats selling for 60 soles.  That’s about 20 bucks.  Crazy.

Just chilling for a bit, going to walk around the square when the lights go down a bit and then head back on a bus on our way to the Incan capital, Cusco!  Our bus arrives at 5 am, at which point we go to our hostel, hang around and then, at 10 am, get to our room and sleep like crazy!

Bye, Arequipa!  You have by far been the highest quality “stopover” on this trip!