So you know how Greyhound and the other Canadian/North American companies charge you a fairly big price (if you’re not a student) for your bus ticket?  And how all you get is transport?  Maybe 40-50 bucks for a trip to North Bay?

Well, for half the price, we’re riding twice as long, getting a meal, watching a movie and enjoying free WiFi.  Welcome to the magic that is Cruz del Sur.

Now, I should point out that buses in Peru have a pretty bad reputation for things like safety and comfort, which is why we picked this one in the first place.  A few dollars more, but the seats are comfy, the food is good, we’re wanded and checked through security and the bus has a GPS on it so if anything bad happened they’d be able to identify the bodies (thanks for that life lesson, mom!)

Before I keep going, I should mention what brought us to the bus at this point in time.  We tried calling for a seat last night but, unfortunately, the bus company was closed, leaving us in a position where we could end up taking a “Soyuz” bus which, as the guy at the desk told us, leave just about every 15 minutes but aren’t that good.  Those of you who know the translation of Soyuz can probably figure out that it’s somewhat reliable, but not made for comfort.  So we knew we had to get up fairly early to get a spot on the good bus.

That being said, we were freaking EXHAUSTED after our flight(s) experience from the previous million hours, so getting up super early wasn’t high on the priority list.  We compromised a bit, with me doing some detective work and Daina sleeping in a bit.  We got an awesome free breakfast from the Flying Dog Hostel’s partner restaurant Cafe de la Paz and then taxied it to the bus station.  We got our tickets for later in the afternoon and booked ahead for a few other days and then we were faced with a decision.  Would we hang around ANOTHER terminal for three hours?  Or would we actually, you know, try to see some of South America? 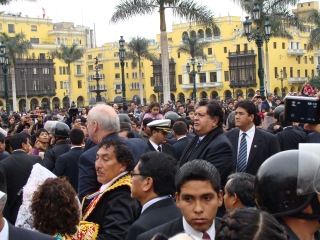 So we grabbed another taxi to Plaza del Armas in central Lima and, let me tell you, I’m glad we did.  There was a MASSIVE celebration happening for Cinco Domingo that featured dancers, performers, one of the high priests from the Puno area of Peru and, we think, the outgoing President of Peru!

Yeah, I know!  We can’t for sure confirm it since I don’t know what the President of Peru looks like, but there was a dude in a suit escorted by tonnes of security who many people in the crowd were referring to as “El Presidente”, so I’m going to put the picture on Facebook later, pretend that it was until I research it and then go from there.

Gotta say, maybe it was just the heightened security presence, but downtown Lima was far more majestic and far less sketchy than I was led to believe.  Great Spanish-style architecture, massive plazas, old churches, cool facades.  Unfortunately, we didn’t get to head to any of the other Plazas, but even driving by the Justice Building or through some of the streets was pretty impressive. 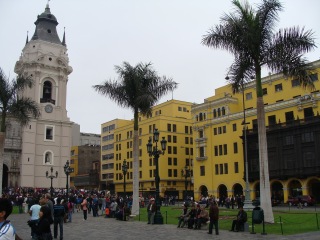 We had to cut things short because, well, we weren’t about to miss another mode of transport, so we cabbed it back to the Cruz del Sur terminal (bus companies run their own terminals here), hopped the bus and here we are.  Blogging on a bus.

We’re set to arrive in Nazca at about 10:30 pm and we’re booked onto a flight to see the lines tomorrow.  Should be spectacular, let’s hope for good weather!