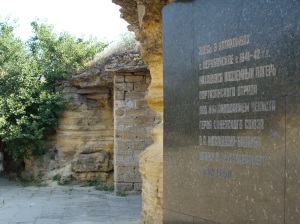 Last night, we boarded a sleeper car to Odessa.  About what I’d expect in terms of space, however GROSS in terms of heat – apparently, they don’t turn on the AC in the train until it starts to move, and then it stops every time the train does.  Considering it was 40 degrees outside, the inside of our travelling steel tube felt a bit like an over, with many passengers stripping down to their bare essentials before the train picked up speed, leaving a moderate breeze to move through the windows.  We headed back to our cabins and, at some point, I dozed off and woke up in a FREEZER at two in the morning.  Looks like the lack of stopping led to some pretty consistent air-conditioning.  Got the sleep I needed, but not the most comfortable of rides.

We get to Odessa and meet our guide, a cute little Jewish Armenian lady (that part does become important later). She explains that we only have the car for the morning so we go out to the Odessa catacombs, a limestone series of tunnels where the Russians fought off the Nazis during WWII. Really amazing and, best of all, 8 degrees! Apparently they were never able to map them, so a guide was a must and she was great.

Get into Odessa and do a walk by of the major sights, the Voronovsky Palace, the Potemkin Steps, where the first shots of the Russian Revolution were fired, some famous statues and the Opera House. Good start. Our room at the hotel is ready and the guide says we can go back and check in and then she’ll meet us for the rest of the tour.

Then things started to get… uncomfortable.

Jabotinsky Memorial Column.  Still have no idea who Baba was talking about.

So we walk through a cool market at first, kind of similar to the covered mall in Milan, and then to a newly redone Russian Orthodox church. All the time our guide is talking about going to the new synagogue, which I’m hesitant on. A 400 year old synagogue, fine, but a new one didn’t seem too exciting. Still, we went along and, in a funny aside, she actually mentioned the name “Jabotinsky”, which is the family name my grandmother pulls out to settle arguments in a Rose from Golden Girls “Back in Saint Olaf” type of way.

Hooked on the promise of a Jabotinsky memorial plaque (which was good for a laugh), we walk a LONG, SLOW way to the new synagogue which was…. underwhelming.  All the way back, our guide basically launches into a weird anti-Ukrainian nationalist, pro-Communist rant with quotes like “You know, Western Ukrainians say the Holodomir was a holocaust directed at them, but how can you target just one group in a famine? Everybody suffered”. I’m not sure if I was right to interpret that comment as “there’s only one Holocaust” comment, but it’s how it sounded. Especially odd when you consider the triple-background here, as Armenian, Jewish and Ukrainian, all of which suffered eradication campaigns, and all of which had the existence of those genocides questioned in spite of mountains of facts.  And bodies.  At this point I’m intentionally walking ahead of mom and the guide, and even mom has stopped engaging, trying to shift focus to the crazy high heeled shoes.

It was kind of too bad, really. Ukraine has so much to see and Odessa is a neat city from what we’ve seen. You never want to let a guide wreck it for you, and maybe this was her attempt at sharing something important to her, thinking it would be as important to us. Can you fault somebody for that?

Maybe. It felt off. Casting dispersions on one genocide by taking apart its name while pushing a community that suffered through a different one came across as tone deaf. There’s room for both.

Anyway, didn’t ruin the day, gave us a story to tell and I’m just back from eating the best cabbage rolls and perogies ever, with apologies to my Baba.

Tomorrow morning, we wake up at 4 am for a 7am flight to Kiev, then a connection to Minsk, Belarus! Sure that will be a blast, but will probably be posting those pics in Warsaw at the earliest.

Overall, Ukraine has been massively surprising and I can’t recommend the country enough. By FAR blew Romania out of the water, that fake Dracula castle doesn’t have shite on the Lavra, Bucharest pales to Kiev and Brasov, Sibiu, Sighisoara combined can’t match Lviv. This country needs more publicity, so I’m giving it. Visit here now before Russia decides it wants its stuff back.

Alright, “Going Dark” for a few days as I head into a country that neve left the Cold War.