We bid a last goodbye to Kiev this morning (though, sadly, not its airport) as we took an early morning flight down to Simferopol, Crimea’s regional capital and transit hub to much better things.

I can’t say, for certain, that we didn’t miss much.  However, after having checked out the rest of the Crimea, I can’t think of what we could have missed that would have been match in Simferopol.

Another leg, another car, another driver, and more and more conversations on Ukrainian politics.  Aside from being Russia “proper” after 2014, you get the sense that the Crimea has always been more Russian than Ukrainian, and when you hear your guide rant against the stupidity of a pro-Ukrainian government spending millions to post road signs in both Russian and Ukrainian… Well, she had something there.  I mean, you’d see the Russian for “Yalta” under the Ukrainian for “Yalta” and realize, “hey, that word is on there twice”.  Maybe a few words had a letter or two that were different, but putting it on an official road sign was the equivalent of seeing the words “airport” and “aeroport” next to each other at Pearson.  Except millions more were spent to put them on signs everywhere, in case one dummy couldn’t replace the ir for the ero.

Leaving the hub, we saw a cute trolley car which will take you from the airport to Yalta in slow, cramped, hot conditions.  With the heat wave still moving the region, we had no problem with a little air conditioning.  Plus, a car lets you make a few stops along the way.

Like a good chunk of Europe and Asia, Ukraine got royally thumped by the Khans.  Here, though, the Khans were able to set up a pretty decent-sized palace.  One of the major Muslim palaces built in Europe, it’s home to the “Fountain of Bakhchysary”, a fountain built to represent the lost love of a concubine from a Khan’s harem, and subject of the verse of the same name.  Read through it here if you like (and by “like”, I mean be ready for 1800s Russian poetry).  Apparently, the poem was famous enough to keep the palace from being wrecked years later by Catherine, so yeah, poetry!  Palace is beautiful, decidedly more Muslim than Russian, and kind of sets the tone for how different the Crimea is from the rest of the Ukraine. 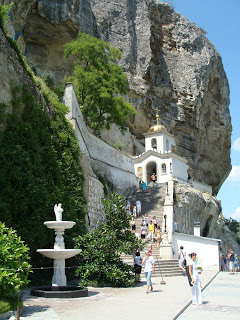 Uspensky Monastery
Way up in the hills is a monastery built to accommodate a Virgin Mary statue that just wouldn’t move.  Legend has it that somebody found the idol on the hill and, in spite of attempts to move it, it just kept returning to the top of the hill.  So, since the idol wasn’t going anywhere, and a statue continually making its way back to where it started is kind of a miracle, they built around it.

This is where you also really start to get a sense of the Crimean topography, with amazing rock formations and cliffs popping up all over, making the act of driving visually breathtaking..

We kept on driving through the hills, past the site of the Charge of the Light Brigade and a ton of red onion vendors (selling in strings on the side of the road, our guide told us that some people actually eat them like apples – no thank you) before finally setting down in our base for this leg.

A little bit of French Riviera feel offset by a statue of Lenin overlooking a McDonalds, Yalta reveals itself pretty fast as the tourist hub for the Crimea.  You’ve got a small midway, a nice paved promenade to take you along the Black Sea, garden restaurants, shopping, and a big souvenir market.  There’s a few interesting sights to see in Yalta itself.  We wandered around the garden of Anton Chekov’s house, taking a seat on the “Champagne Bench”, where Chekov would share his secrets with his guests.  A few small churches and gardens jut off from the promenade as well.

…which is a decidedly “Russian” experience.  The comparison with the French Riviera extends to the pebble beaches, which are not comfortable to walk on and, by extension, wade into from the shore.  You also get the quintessential Eastern European swimwear.  I don’t ever want to dictate what somebody should or shouldn’t wear, and I’m by no means a body double for a Magic Mike movie, but the swimwear for most beachgoers seems to follow the “Less is more” approach, as in you’re going to see a lot less swimwear and a lot more skin, and not always in the most glamorous way.

Yalta is also where I started to notice the “Aging Through the Windshield” effect in Ukraine at its best.  Basically, everybody between 18-25 seems genetically perfect, then you don’t see anybody who looks to be between 25-40, and everybody after 40 looks a bit rough.  It’s like there’s a moment where age just happens over here.

On to some of the rest of the peninsula.

Vorontsov Palace
Beautiful palace built a little under 200 years ago with no particular architectural style which, in a way, makes it even more beautiful.  You get a little bit of Gothic, Moorish, Russian, Islamic… a real smattering.  The grounds are framed by the Crimean mountains, with Al-Pietri looming large in the background, beautiful gardens, views out to the Black Sea.  Fantastic for a walk around.

Less impressive from a beauty standpoint, but more important from a historical one, Livadia was where Nicholas II spent his summers and where Roosevelt, Stalin and Churchill met up for the Yalta conference to re-organize Europe after WWII.  Some neat displays about the history of the conference and the region.

The Swallow’s Nest
We didn’t make it down to the nest itself – apparently, it now serves as a restaurant and gift shop, and not much else – but this tiny little “castle” couldn’t possibly have a better location, jutting out over a cliff on the edge of the Black Sea.  Good for some photos, if nothing else.

Now, here’s the thing.  I was in Crimea five years ago.  I couldn’t tell you the first thing about what it’s like in Crimea now.  From what I understand, most of the fighting has missed it, so the beauty should mostly be intact.  Unlike the rest of Ukraine, you now need a visa to visit (because Russia), so that’s probably going to put some people off.

And that’s a damn shame.  It’s an important, lovely peninsula with a ton of beauty and history that really shouldn’t be missed.  Russia established a pretty good tourist infrastructure to during the USSR days, and I’d imagine that’s still flowing well enough.  And frankly, we didn’t see that many Europeans and certainly no North Americans there during our stay.

So it might be an interesting time to go visit, if nothing else.