When deciding if I was going to go to Chornobyl…

Well, I’m going to stop myself there and drop all pretense.  There was never really any “deciding”.  Or, to put it more bluntly, “deciding” involved finding out if I would come back radioactive.  Once I found out the answer was “no” (and that I actually absorbed more radiation on the flight from Canada than I did during the Chornobyl tour), it seemed like finding a justification beyond “it seems really cool.”

It was a justification mom couldn’t find, as she wavered between outright fear of being irradiated, to being caught up in some sort of military conflict a la Call of Duty (a reference she wouldn’t get), to just seeing the tragedy that is outlined at the amazing Chornobyl Museum in Kiev.  Basically, for whatever reason, she couldn’t bring herself to go.

Truth be told, I don’t think I actually verbalized the justification until mom, slightly anxious as I was headed to the travel agency, asked me why I had to go, and that it scared her that I was going.

Basically, in my head at least, Chornobyl is the Vesuvius of our time, which makes the neighbouring town of Pripyat our Pompeii.  It was a chance to see an lost civilization.  As much as some people may joke about how parts of Eastern Europe are stuck in the 80s, this is the city that was actually stuck in the eighties.  It may seem morbid to visit the site of the largest nuclear disaster of all time… well, it’s morbid.  There’s no way about it.

Maybe I just have to chalk this one up to curiosity.

The day started early with a pick-up near Independence Square by SAM Travel, who had me at “long established company” when I read the Lonely Planet review.  Same guy has been running tours since the start, makes one feel safer.  Chernobyl has a dress code of pants, short sleeved shirts and closed-toe shoes, all of which should be respectful.  After all, the site does lie within what is called the “Exclusion Zone”, 30 km of space between the rest of the world and the blown out reactor.  Considering the original explosion affected nearly 5 million people in Russia, Ukraine and Belarus (which actually got the worst of it), and was first noticed by Swedish scientists (because the Soviets were pretty slow with recognizing when stuff had gone horribly wrong), 30 km seems like more than enough space.

On the drive to the zone, we were shown a video outlining basics of the tour, were given some instruction as to what we could and could not do, and then we watched a video that outlined, in-depth, the entire tragedy.  Like the “bio-robots”, workers who had to dump the radioactive debris from the roof of the reactor into the open reactor hole itself, but who could only spend 40 seconds on the roof, because anything more than that would be exposing them to to much radiation.  Or the people who still live in the zone, because when you’re living in a Communist country with little regard for its people or property, being told that “invisible particles” will eventually kill you sounds like a pretty crummy excuse.  Some sobering stuff, there.

The drive to the “official” start of the tour was ghostly enough, with military men scanning cars with wands, old rusted signs in Cyrillic, and nothing except the other cars on the road.  Our first stop was the (excitingly named) administration centre, where we got a solid rehash of the information from the bus, which was good, because most of it was so mind-numbingly sad that I think I had tried to block it from my mind to maintain some semblance of humanity.  We were also given some very strict guidelines, specifically;

Don’t wander off into the forest, as the radiation levels are much higher amongst the vegetation than they are on the concrete.

Don’t be late for the bus, because if you decide to abuse your time off the bus, you will not be let off the bus again (this is a military site, after all).

Nothing framed as a suggestion.  Just don’t.

Our first stop would be the reactor proper and it’s “Sarcophagus”, a “containment unit” which, I was told, was actually starting to crumble but would soon be replaced by a better containment unit built by the French.  Not before we got there, but soon.  We drove past some old, decommissioned military vehicles – I don’t care if they were just left there “for effect” or not, because the effect freaking worked –  We drove past giant canals and reservoirs, where equally giant fish would swim, not because they were mutated by the radiation, but because the radiation killed all their predators.  More old signs indicating the way to Pripyat and other towns.  All of them looking the 25 years their age. 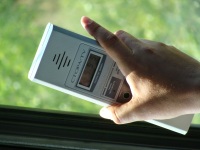 In what I think was an attempt to get us to follow the rules, the driver also took us to the “Red Forest”, an area where the whole forest basically grew back irradiated.  He put his dosimeter up to the window of the bus, and the radiation levels shoot up hundreds of times higher than they should be.  I can’t even remember the math right now, some websites I’ve checked say the zone they take you to goes 250 times higher, but all I know is the dosimeter was sitting very comfortably at some lower number with a decimal in front of it, and then it shot up to 25.55, which, yeah, when I do the math, looks like 250 times.

So we didn’t stay long at the Red Forest. 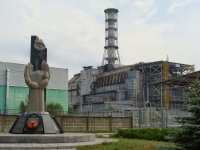 After the forest stop, we managed to get off the bus again to look at the memorial for the Heroes of Chornobyl, the people who put out the fires, cleaned the debris, evacuated people, and build the containment unit.  It was the closest I’ve ever (knowingly) stood to a nuclear reactor, and it didn’t help my sanity that the temperature was pushing 40 Celsius.  The smart part of me knows that radioactivity can still exist in the cold, but then you’re standing next to a blown-up reactor with an old containment unit, so…

Now, just with the build-up and knowledge of history, this would be enough.  You’re kind of emotionally exhausted by this point.  However, Chornobyl will do you one better.

This town of 50000 people was evacuated in one day because, unlike some of the smaller villages outside of the 10 km exclusion zone (there’s a second exclusion zone, BTW), anybody staying here would have been dead.  So the term “Ghost Town” certainly applies here.  People took what they could carry and got out of dodge and, in somewhat of a sad nod to the current situation of some in Ukraine, but also maybe to safety, people have started to venture into Pripyat to loot on occasion, so much so that the Ukrainian government has had to institute Chornobyl-Specific laws against scavenging and hunting in the zone (wildlife has made a big comeback in areas where there isn’t too much radiation).

First stop was the town square, where you could make out the sign for the supermarket, some old Soviet signs, and a big “restaurant” sign poking out from 25 years of tree growth.  Then, we went past some of the old bloc-style housing. 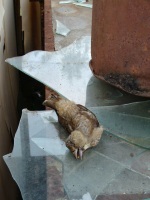 Because, really, if you’re looking to have a terrifying time in a ghost town, an old, abandoned fairground should really be tops of your list.

I’m hoping the pictures can convey a sense of how surreal being in this bombed-out fairground could be.  The actual, mummified bird in the control cage for the Ferris wheel kind of drove it home for me. 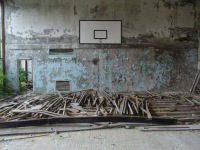 Then, you get your real flashback moments, like when you go into some of the old administrative buildings and see old CCCP propaganda posters.  Or the high school, complete with abandoned swimming pools and textbooks featuring Yuri Gagarin on the cover.  Toppled bookshelves, a basketball court with its peeling paint and destroyed wood floors.  Walking over broken stone and glass, wondering if radiation can get transmitted through cuts, because that’s a sensible and not terrifying thing to worry about.  Apparently, now, there’s also an option to visit an old river port, complete with rusting and decomposing ships.

So after that sobering walk through history, it was time for lunch and the bus ride home.

Now, of course, traffic on the way back was slow, which led me to getting back to Kiev late, which led to me returning to the hotel late, which led to mom panicking and calling dad in Canada, convinced that I had somehow been abducted by the military or something.  It actually made for a humorous comedown after an intense tour.

So, the question, “Should I tour Chornobyl?”  Depends on you.  I don’t freak out easily, and it was a pretty jarring experience for me.  You’re not going to die, nobody will take you, and it’s 4 years later and I haven’t grown an extra arm or anything.  That said, it’s not a happy day of touring.  It’s important history, though.  And, frankly, incredible to see nature coming back to clean up after one of our biggest messes.  So, the decision lies with you.