Holy freakin’ Lviv! Where have you been all my life?

This city is just gorgeous. Tonnes of old churches, a beautiful opera house, old buidlings, very little Soviet style architecture – It reminds me a lot of the pictures I’ve seen of Krakow and Wroclaw.

Again, we happened to be doing a day-tour of the city the next day, so our walk-around wasn’t going to be anything too spectacular.

First thing I did was find a call centre.  For those who were born before these existed, basically, if you wanted to call home, you went to a store with lots of phones, where you bought international calling time.  This was pre-Skype and FaceTime.  I remember traveling in the past and finding long distance call centres everywhere. With cell phones and international SIM cards, they seem to have died out or are now restricted to a corner of an internet cafe. Maybe it’s just an eastern European thing – I don’t know if it’s changed now in the Caribbean, where I noticed it the most – but it’s one of those fundamental differences in travel now versus travel not even ten years ago. Boggles the mind how quickly technology has moved along that a land line call centre is so hard to find!

Anyway, just tossing those thoughts in there for the record’s sake.  My first travel experience was sans-Internet, in Australia, though a travel agent, with eight rolls of film.

Film. Let that sink in.

Anyway, one sleep and a billion wedding pictures did nothing to change my belief that Lviv is just unbelievable. I can’t remember the last city I came to where I was just totally amazed by the architecture, the atmosphere, everything. The city has changed hands from the Austrians to the Ukrainians to the Poles to the Nazis to the Soviets various different times in various orders. It’s left the city as this amazing mix of churches and building.

There’s an Orthodox church, a Catholic church, an Armenian church, an Episcopalial Church, a Seventh Day Adventist Church…. Every heard of the Bernardines? They were monks who were allowed to carry guns. Yeah, there’s just about every religion you can think of here and even a Jewish festival going on through the city today.

There’s a cafe which was formerly the headquarter for the Ukrainian underground, which you can only get in to with a password. It doesn’t matter who you are, you need to get the password to get in. This is also where we started to get a sense of the differing views of Russia and the West that exist through Ukraine.  Our guide in Kiev gave us a fairly balanced view of how the different parts of Ukraine may think about their neighbours.  Well, in Lviv, everything was very pro-Ukraine and anti-Soviet, militant almost to a feverish point.  Keep in mind that Lviv fought both the Nazis and the Soviets at various times, so “Ukrainian” would seem to be the default identity they would move towards.  Writing this in December of 2014, you could never imagine “Pro-Russian Separatists” setting up shop here. 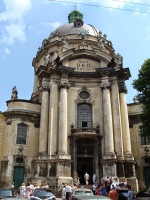 Every building you see has at least one amazing statue, sculpture or feature.

They lit my coffee on fire and I was served frozen pork fat covered in chocolate next to a gallery where artists can show work. Admission, also free.

There’s a pharmacy museum which has been open for three hundred years and still functions as a pharmacy.

Everything about this city seems alive and just on that border between being untouched and touristed. The electricity is amazing.

Plus, if you’re going to see one thing here, it’s the one outside of town, the Lychakiv Cemetery.  Filled with famous graves, including the grave of Ivan Franko, a poet who helped shape the Ukrainian language, and beautiful war memorials, the place blends classic sculpture with the austere Soviet style and enough greenery, including moss growing on statues, to make it a beautiful place to spend an hour or two in.

I know most people don’t usually travel to eastern Europe past Romania or the Czech Republic, and fewer go to Ukraine, but I would highly recommend you get here. I don’t think it’ll ever get over-touristed but hopefully it will maintain just the level it’s at right now. Simply amazing.