So it’s typically good to find something on the “Road Less Traveled”, and a fortified town perched on a rock surrounded by a river canyon that nobody ever goes to sounded pretty amazing.  And it was.

Again, the advantage of having a private driver is that you can avoid trains and buses and take a more direct route to out-of-the-way places.  Lviv to Kamyanets-Podilsky isn’t a short trip – about four plus hours by car, but visually worth the drive.

The first records of Kamyanets as a town show up in the 11th century (as does almost everything in Ukraine), though, probably because of its amazing location, people have been linked there as early as the 1st century.  It’s been captured by the Poles, Mongols, Ottomans, Russia (Czarist and Soviet), Austria-Hungary and Nazi Germany.  Mainly inhabited by Ukrainians, Poles, Armenians and Jews, you see various architectural influences, and the churches in the town spent time as mosques.  In fact, in an interesting little jab at the Ottomans at the time, one of the churches converted its minaret into a “tower” for a Virgin Mary statue, with Mary standing on top of the Muslim crescent.

Now, in the same vein of keeping thing classy, this church, while having some of the neatest drawings and depictions of Jesus and the Stations of the Cross I’d ever seen, also had some of the goriest anti-abortion pictures I’ve ever seen.  While I get the whole anti-abortion idea held by some religious folks, though not necessarily agreeing with it, I’ve never found the blood-and-guts approach any more effective than the fire-and-brimstone approach.  Scares the timid and alienates the strong, take that as you will. 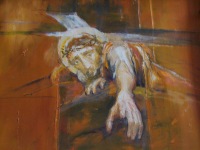 I feel this may be a good time to talk about the downside to doing private tours.

We were informed by our guide from Lviv (who was following us all the way through to Chernivtsi) that, due to “rules” about who could guide where, she wouldn’t be guiding us here.  Instead, we got a “local expert.”

Guy was definitely an expert, but in terms of being a guide…

Look, I’m not going to begrudge anybody for getting a job they love in a middle-of-nowhere town in Eastern Ukraine.  Nor am I expecting a super-professional, top-of-the-line experience.  I’m pretty sure, however, that this guys high-interest item was Kamyanets-Podilsky and the social skills to lead somebody around it, less so. So, while the whole tour was super informative, there were a few times where we had to tell the guy to stop, slow down or wait a second, starting at the aforementioned minaret and his warning of “Don’t kill babies” while we looked uncomfortably at the abortion pictures.

He definitely tried and knew his stuff, though. 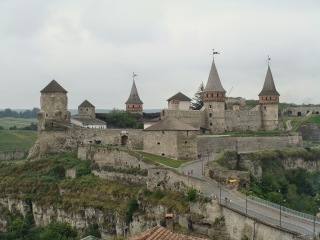 Anyway, he started to slow down and get better once we got to the old castle, which makes for a wonderful visual (though it was reconstructed a few times due to all the different handovers mentioned above.  You get some great views of the Smotrych River canyon, there’s an ethnographic museum on site with some decent information on the town itself as well.

Some of the things you can do (but we didn’t do) while you’re in Kamyanets include bungee jumping, biking or horseback riding.  The town itself has a few other neat sites, and we actually found some decent pizza to start our day, too.

After being handed back to the Lviv guides, we were on our way to Chernivtsi, for what we thought was going to be a lunch-and-airport stop, with an early flight out the next morning back to Kiev.  After a knowing “Hey, how was your guide…?”, we were asked if we wanted to have somebody show us around Chernivtsi for one or two hours, or if we just wanted to relax at the hotel.  Well, neither of us are “relax at the hotel” types, and not knowing a single thing about Chernivtsi, we decided a guide wouldn’t be a bad idea.

Fortunately, both the guide and the city itself were a pleasant surprise.  I don’t know how a city with a nickname like “Little Vienna” stayed off the radar, but we managed to catch some interesting sights.  Aside from the “Drunken Church” we saw from the highway (so named because of it’s twisty, diagonal columns at its entrance), the two big visual draws would be the Theatre Square of the town and the UNESCO listed Residence of Bukovinian and Dalmatians Metropolitans.  That second one ranks as a mouthful, so if you want to make it easier, you can say “Chernivtsi University”.  The Residence was part of a massive theological institute, and though we never got inside due to time constraints, a Google search of the place later makes me wish we did.

Plus, its sister city in Canada?  Saskatoon!

Not saying Chernvtsi is Lviv or Kiev, but it was a pleasant surprise and a city I could have probably have spent more than an afternoon in.  Unfortunately, we did find a pretty crummy restaurant to eat in – it looked “Authentically Ukrainian” but gave me “Less-Than Authentic Food” and “Authentic Stomach Issues”.  We stayed in the Bukovyna Hotel Complex, who is rated on Trip Advisor as a 3.5, “relatively ok” hotel.  It was fine for a place to stay for the night, though they did promise a free breakfast in the morning (we were up really early for a flight), which turned into $10 for 3 pastries. So maybe they have to up the tourism game there a bit.

Anyway, I would definitely say these two places are more off the tourist track than the other places we hit in Ukraine, but weird guides, stomach issues and expensive morning pastries aside, definitely worth checking out.